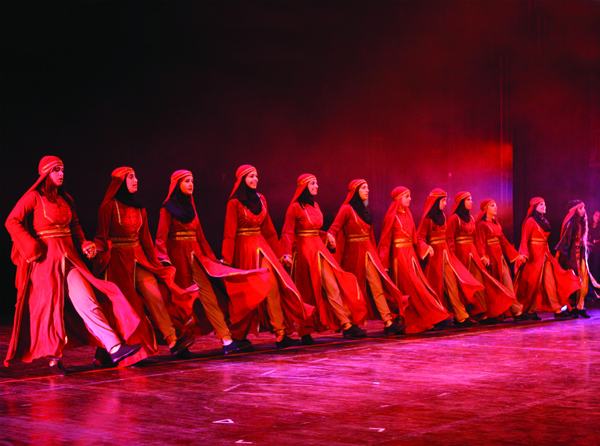 El-Funoun’s vision and mission are closely linked to community development whereby El-Funoun has been playing a pivotal role in shaping an effective cultural movement in Palestine seeking to strengthen the Palestinians political, national and cultural identity.

El-Funoun as such has worked on strengthening the bonding between society and folklore as major components of the cultural identity, which has been subject to expropriation and suppression. Since its inception, it has been diligently working towards spreading the richness of Palestinian folklore not only through its productions and performances widely, but also through investing efforts in training young groups in rural areas. El-Funoun trains in hundreds of community centers and schools, and has established a number of dance groups in rural areas many include female members which in itself is a double challenge: on one hand El-Funoun sought to protect and enhance the threatened Palestinian cultural identity, and on the other hand had to challenge some of outdated norms and traditions restricting freedom of expression and women’s participation.

El-Funoun has become a reference point to many emerging groups whereby these groups are inspired and influenced by El-Funoun’s choreography, costumes and dance technique.

Following are the groups established or developed through El-Funoun’s outreach program, noting that some of these groups are important participants today in local festivals organized nationally:

Handala Popular Dance Group / Saffa village (2006)
Since its establishment in 2006, Handala Dance Group has participated in dozens of local performances.This “dabke” group is part of the cultural programs organized by Handala Youth Center, located in Saffa village (north-west of Ramallah), which is a youth club that works to promote cultural and social diversity.

Beit Illu Popular Dance Group for girls / Beit Illu village (2007)
Since its establishment the Group participated in several festivals and events on the national level. The Beit Illu Youth club’s aim behind the establishment of this “dabke” group was to revive and preserve Palestinian culture by involving the young people, young girls in particular of Beit Illu village.

Al-Hadaf Popular Dance Group / Bilein village (2009)
This Group was established as part of the artistic activities organized by Al-Hadaf Cultural Center in Belei’n that is suffocating and imprisoned from the “apartheid wall” built on the village’s land. The Center aims at preserving the Palestinian heritage by involving the youth in the village in cultural activities. The first performance for the Group was at the “Heritage Festival 2009” organized by the Popular Art Centre in Ramallah. After the outstanding success of the Group, Al-Hadaf Centre encouraged female’s participants to join; today the Group is mixed including 21 dancers.

Al-Hadaf Popular Arts Troupe/ Bil’in  (2011)
Following the founding of an all-male troupe and the astounding success it achieved, the center’s administration sought to further its work by establishing a mixed-gender troupe for boys and girls. This second troupe follows in the center’s vision of enhancing the participation of young women in activities of this sort, which encourage mixed-gender socialization.The troupe took part in a number of national and artistic events.